How can I control my anger

If that’s the question you’re asking then you’re reading the right article.

Anger is an emotional state that varies in intensity from mild irritation to intense fury and rage towards someone, something or an event.

Anger is considered a normal healthy emotion, neither good nor bad. Like other emotion, it conveys a message, telling you that a situation is upsetting, unjust or threatening. It is perfectly normal to feel angry when you’ve been mistreated or wronged.

Anger becomes a problem when you express it in a way that harms yourself or others because on the long run you may end up regretting and feeling sober for letting your anger control you.

Anger becomes problematic if it leads to aggression, outbursts, or even physical abuse/destruction.

Anger control is important as it helps  you to avoid saying or doing something you may regret (sometimes the results of anger are destructive and breaks relationships). Before anger escalates, you can use specific strategies for controlling anger.

Feeling angry often and to an extreme degree can affect relationships and a person’s psychological well-being and quality of life. On the other hand suppressing and storing up anger can also have a damaging and lasting impact which can lead to a very destructive path.

Often times when you get angry, your heart rate and blood pressure increase, including the levels of your energy hormones, adrenaline, and noradrenaline.

On the other hand, we can’t physically lash out at every person or object that irritates or upset us; laws, social norms, and common sense place limits on how far we can express our anger.

Psychology have pointed out that some people are more hot-headed than others, they get angry easily and intensely. It is said that these people have low tolerance for irritation and frustration.

The possession of Intense anger by an individual might be due to several factors: genetic, it can be learned unconsciously, stress, depression, e.t.c.

Since anger is an emotion, we can’t stop ourselves from getting angry and upset over some circumstances but we can control our reactions while angry though it may not be easy.

This involves several skills that can help with recognizing the signs of anger and handling triggers in a positive way.

Being able to control your anger is very important that’s why there are so many anger management classes.

Effective Ways to Manage and Control Your Anger.

1. Try to quickly identify when you’re getting irritated or upset:

Irritation is one of the triggers of anger therefore why the anger gradually builds up it is advisable to identify the signs so it can be channelled and expressed in a better manner.

Anger causes a physical reaction in the body. It releases adrenaline, the “fight-or-flight” hormone that prepares a person for conflict or danger.

This can have the following effects:

2. Take a step back: it does not mean that you should back off when you start feeling upset or when you aren’t treated well, instead it is meant to buy you some time that can be fundamental in limiting an angry response.

When you start to notice the gradual signs of anger, it is advisable to:

This entails changing the way you think and reason. Angry people often curse, swear, or speak in highly colourful terms that reflect their inner thoughts. When you’re angry, your thinking can get very exaggerated and overly dramatic. The solution is to try to replace these thoughts with more rational ones. For instance, instead of telling yourself, “oh, it’s awful, it’s terrible, everything’s ruined,” tell yourself, “it’s frustrating, and it’s understandable that I’m upset about it, but it’s not the end of the world and getting angry is not going to fix it anyhow.”

Remind yourself that the world is “not out to get you,” you’re just experiencing some of the rough spots of daily life.

Always remember that getting angry is not going to fix anything, that it won’t make you feel better or change the situation.

Also think before you speak so you don’t end up saying what you may regret later.

4. Changing Your Environment: Sometimes it’s our immediate surroundings that raises triggers for irritation and fury. Problems and responsibilities can weigh on you and make you feel angry at the “trap” you seem to have fallen into and all the people and things that form that trap.

Give yourself a break. Make sure you have some “alone time” scheduled for times of the day that you know are particularly stressful. One example is the working mother who has a standing rule that when she comes home from work, for the first 15 minutes “nobody talks to Mom unless the house is on fire.” After this brief quiet time, she feels better prepared to handle demands from her kids without blowing up at them.

5. Breath and relax your muscles:

Your breathing becomes shallower and speeds up as you grow angry. Reverse that trend (and your anger) by taking slow deep breaths from your nose and exhaling out of your mouth for several moments. Exhale more than you inhale.

6. Meditate and play some tunes:

You can play melodious tunes or your favourite music while singing and humming along. Let the music carry you away from your feelings.

Yoga or any other proper exercise that can ease your nerves is okay. Boxing or martial arts, can be useful outlets for aggressive or confrontational feelings to let your anger out.

Also, learn how you can manage Stress 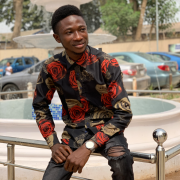 Ifedozie Justine Nnamdi popularly known as LekkiBoy is a young Nigerian that's passionate about how he can improve lives and add values to them. He wanna change the world and give people reasons to live and succeed.

Check Also
Close
Health Advice
Facebook Twitter WhatsApp Telegram
Back to top button
Close
Just In
Close
Close
Log In
We use cookies to ensure that we give you the best experience on our website. If you continue to use this site we will assume that you are happy with it.OkPrivacy policy